Undaunted Hope is the third book in the series Beacons of Hope by Jody Hedlund. The first book, Love Unexpected, was published in December of 2014.  A few months later (June 2015), book two became available, Hearts Made Whole. I am so impressed with the quickness of author Jody Hedlund! 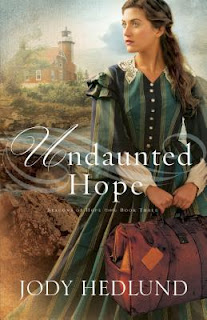 The Beacons of Hope is a series tied together with the themes of lighthouses, love, Michigan, and faith. Book one was about Emma Chambers and her brother Ryan. Book two was about Ryan and Caroline Taylor and her siblings. Book three features Caroline's sister Tessa Taylor.

Tessa's past decisions (which you can read more about in Hearts Made Whole) brought her heartache and a bad reputation. Tessa took a job teaching in Michigan's Upper Pennisula to begin anew and escape life in a lighthouse. Yet running from one heartache and lead to more heartache.

Tessa needs to fight to keep her position as teacher. She wants to remove herself from lighthouse life, but two bachelor brothers who run the lighthouse seek her heart. She also wants to fight the power of the town's controller Percival Updegraff.

Undaunted Hope is an excellent installment in the Beacons of Hope series. Hedlund takes you to another part of Michigan, as well as, another area in the Great Lakes. Tessa's strong personality from book two was wonderfully expanded upon in book three. I wanted to hear more and I definitely got it! Tessa got tangled into a whole new world that is dark and dangerous. Updegraff runs the town and his way is the only way. Tessa's a fighter. She wants to fight and inspire others to fight and give themselves (and their families) a better life. (As I read, I wanted to join the fight, too.)

Tessa's story was fantastic! It reminds me of a verse from the book of John, "The light shines in the darkness, and the darkness has not overcome it." There are moments of shock, sadness, and fear, but the strong will overcome. God does not turn away from his children. He does not gives us a spirit of fear. God give us power and love.

I am looking forward to Jody Hedlund's next book in the Beacons of Hope series. The driftwood cross that was given to each character has been shared again. This time, it was given back to the family who originally owned the cross. I cannot wait to hear what will happen next!

Reviewed from a complimentary copy. Thank you, Jody Hedlund and Bethany House!

Email ThisBlogThis!Share to TwitterShare to FacebookShare to Pinterest
Labels: Faith Fiction, Series, U