When I first paged through Rooted in Design, I was not drawn to it. The photographs seemed stylized and too urban; the ratio of project how-to's versus plain text was uneven to my eyes. I'm from a suburban area and the authors are from Chicago and New York. The plants might be the same, but the housing and room decor depicted didn't feel familiar. For two months, I left Rooted in Design on my to-read shelf at home. I needed to give this book an honest chance. I'm glad I did! 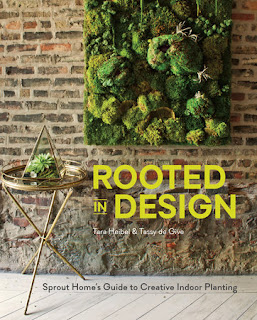 After actually reading the text, not just relying on the photographs or the eight Make If Your Own how-to's, this is a very well put together book. The authors offer different design ideas for every living space. It doesn't matter if you have an apartment or a house. It doesn't matter if you have floor space, wall space, table space, or ledge space. They share plenty of ideas for plant lovers. They offer ideas from the floor to the ceiling, from attaching to the wall to movable walls of plants. Beyond just room design, they share their plant knowledge from plant design to plant care. If you enjoy live plants or preserved plants, they have projects for every type of indoor gardener.

I currently have numerous houseplants. They are happily residing on kitchen counters right now, but they will be moving soon! I feel inspired to redesign my plants to fit together better and enhance my living spaces. Rooted in Design was described as a having DIY projects, tips, and guidance. I agree! Before winter sets in, I'm going to put on some garden gloves and get dirty!

I received this book for free from Blogging for Books for this review.

Perusing my Facebook feed, I found Thomas Nelson & Zondervan Fiction's post about National Lighthouse Day. They shared, "Happy ‪#‎NationalLighthouseDay‬! No lighthouses nearby? No problem. Just celebrate with one of these Lightkeeper novels from Colleen Coble!"

Today is a great day to celebrate lighthouses! In my neck of the woods, it is cloudy and rainy which would be fine weather to light the lighthouse beam. I'm also near the Great Lakes, so lighthouses are just a short drive away if I wanted to go visiting.

Colleen Coble isn't the only author to write about lighthouses. Jody Hedlund is writing the Beacons of Hope series about lighthouses. Barbour Publishing also came out with a novella collection called The Lighthouse Brides Collection. Those are only a few fiction books that mention lighthouses. What lighthouse books (or lighthouses) are you familiar with?
Posted by Miss Pippi at 10:05 AM No comments:

Have you met Susan? Susan Anne Mason to be exact. Bethany House published a new series (and her first historical novel) called Courage to Dream. Book one is Irish Meadows.

Irish Meadows is a horse farm located on Long Island in New York. The O'Learys are raising horses, but times are hurting for their livelihood. The year is 1911 and an anti-gambling legislature is putting a damper on Mr. O'Leary's profits in horse racing and gambling that came from horse owners working with Irish Meadows. Mr. O'Leary is looking to remain solvent and keep his place in society. He's not above pressuring his daughters, Brianna and Colleen, as well as his "adopted" son, Gilbert Whelan to marry well. Brianna, Colleen, and Gilbert are not keen on the plans made for their lives, but how can they turn from the man who gave them everything?

Once I began reading Irish Meadows, it was difficult to set it down! It was as gripping as one of my other favorite series, The Daughters of Boston by Julie Lessman. Similar themes include sibling relationships, love stories, Irish heritage, and faith. Lessman writes about Boston (and Ireland) and Mason writes about Long Island. If you enjoyed Julie's series, you'll enjoy Susan's Irish Meadows and visa verse.

If I could say one thing about Irish Meadows, it would be MORE! I could have read two or three more stories about all the characters in this book, but the story was nice and tight. For talking about four main characters, a "short" novel is quite impressive. Mason wrapped up many difficult story lines well. She does leave room for more stories from the O'Leary clan which I am eager to read. I've never been too much of a horse enthusiast and the balance between no horse information and too much horse information was just right.

Book two, A Worthy Heart, is set to come out in January 2016. I am looking forward to the next installment in the series Courage to Dream. I hope to read more about the entire O'Leary family, not just the rouge brother, Adam.

Reviewed from a complimentary copy. Thank you, Susan Ann Mason and Bethany House!