Miss Annabel Ashton shares her story. It's Gothic and captivating. It brought to mind Jane Austen's Northanger Abbey, but instead of poking fun at a Gothic tale, it's a true haunting mystery. Yes, there is a touch of romance and faith in the tale, but I think it's mostly a mystery told in the first person.

Annabel needs to uncover the mystery of her mother (if she was truly married or not) and if she is going insane (just like her mother). Beyond Annabel's personal mysteries, her cousin Edward is working on business dealings and asking Annabel help the conversation go well between him and new (possible) business partners. Edward and Annabel grew up together, but their views of each other are vastly different. Annabel desires the sibling friendship they had when they were younger while Edward wants to use Annabel for his own gain, a pawn for his debts and business dealings. Her faith in the Lord gives her strength when she is hurt by Edward and his wife's dealings.

Byrd weaves an interesting historical faith facts in this book. Annabel is Catholic which is a minority in England. She meets other devote Catholics around her family's estate, Highcliffe, but again they are in the minority. After Annabel's tale, Byrd shares an Author's Note about Christianity in England. It's a a very brief overview, but very interesting.

Bride of a Distant Isle is book two in the Daughters of Hampshire series. I previously read Mist of Midnight, book one. I think each story is a standalone piece with the location of Hampshire and the Gothic genre tying them together. GoodReads says that there will be a book three in the series called A Lady in Disguise coming in 2017. I am looking forward to reading it!

Reviewed from an Edelweiss copy. Thank you, Howard Books!

During our Fall session of storytime at the library, I share eight weeks of storytimes. I try to think of new and exciting themes to share. This fall my co-worker and I decided to share a nursery rhyme with each storytime. We sometimes overlapped, but over all we had different rhymes with different themes. It was a lot of fun and I would encourage you to give it a try! Here's a brief glimpse of some of the storytime materials I shared this Fall: 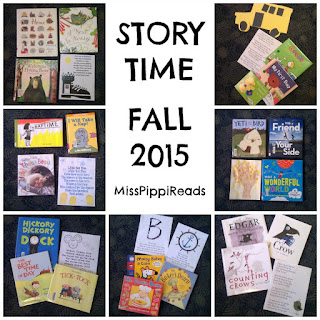 Nursery Rhyme: There Was an Old Woman Who Lived in a Shoe
Theme: Home

Themes I have used before were houses, school, baking, and crows. Even with repeated themes, the audience is new and for the most part the books are new as well! My favorite storytime this season was the black birds storytime.
Posted by Miss Pippi at 10:40 AM No comments: