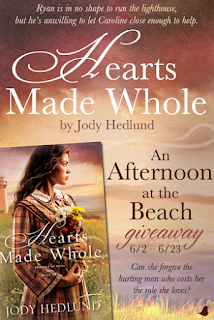 In celebration of book three's reveal, here's a little Q & A with Jody about book two, Hearts Made Whole. Enjoy!

1. How did you come up with the idea for Hearts Made Whole?

Historical textbooks are full of stories about men like George Washington, Thomas Edison, Andrew Carnegie, and so many more. And while such men are truly remarkable, all too often their stories overshadow equally courageous and remarkable women. One of my goals as an author is to help bring forgotten women of the past to life.

In the Beacons of Hope series, I'm focusing on historical women light keepers who have often been kept in the dark by the more prominent stories of their male counterparts.

As I researched for writing a lighthouse series, I came across a fantastic book called, Ladies of the Lights: Michigan Women in the U.S. Lighthouse Service. The book is a tribute to the approximately 50 or so women who served either as primary or assistant keepers in Michigan Lighthouses.

I based the heroine in Hearts Made Whole on one of those women light keepers. It's my hope to bring her and the other women keepers out of the historical shadows and into the spotlight.


2. Each of your lighthouse books is set at a real lighthouse that once existed in Michigan or still does exist. Tell us a little about the lighthouse in this second book.

In my first lighthouse book (Love Unexpected), the lighthouse was set at Presque Isle which is on Lake Huron on the north eastern side of the state. For the second book, I picked a lighthouse in a completely new location with the intention of giving readers a different flavor of climate, geography, and the population. 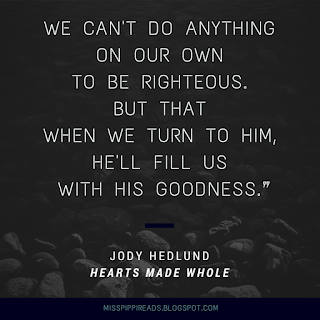 Windmill Point Lighthouse once existed on Lake St. Clair near Detroit, a much more urban and highly trafficked area than the remote wilderness of Presque Isle. Windmill Point Lighthouse was a strategic beacon that helped ships cross from Lake Huron over into Lake Erie as those ships transported raw goods from the Northwest states to eastern cities and seaports.

The lighthouse is named after the old ruins of a windmill where early frontiersmen brought their grain for grinding. Also, legends attribute the area to being an old battle field of a savage encounter between the early French settlers and Indians. As many as 1000 Fox Indians were slaughtered on the banks of Lake St. Clair. Later settlers to the area uncovered bones, arrowheads, tomahawks, and other gruesome mementos of the battle.

Today, all traces of the original windmill, lighthouse, and burial grounds are long gone. If you visit Grosse Pointe in the Detroit area, all that remains is a small conical structure with a white flashing light.

3. Many of the heroines in your books are inspired by real women. Is that true of the heroine in Hearts Made Whole? If so, what women provided inspiration?

The woman light keeper in Hearts Made Whole is inspired by Caroline Antaya. Caroline lived at the
Mamajuda Lighthouse on the Detroit River a short distance away from Windmill Point Lighthouse.

Caroline's husband served with honor in the Union army during the Civil War, losing several fingers on his hand at Gettysburg. Eventually after returning from the war, her husband was named as keeper of the Mamajuda Lighthouse, but he passed away of tuberculosis.

Part of what really impressed me about Caroline Antaya's situation was that she had been doing a
fantastic job as a light keeper. But the district lighthouse inspector trumped up charges against her
saying that she was in ill-health and incompetent. He took away her position simply because she was a woman and gave it to a man instead. Fortunately, her community rose to her defense and enlisted the help of a Michigan Senator to help her get her position back and she went on to serve as a light keeper for another three years.

In those days, when women were regularly discriminated against because of gender, Caroline's story is inspirational and an encouragement to persevere in the face of injustice. I admired Caroline's will to stand up for herself and to pave the way for women coming after her to use their God-given talents and abilities in roles and jobs that had previously been closed to women.


4. Why lighthouses? What fascinates you about these shining beacons?

I'm fascinated with lighthouses for a number of reasons. First, my state of Michigan is home to the greatest concentration of lights in the United States. In fact, Michigan is noted as the state where the most lighthouses were erected. And now today, more than 120 remain compared to 500 total for the rest of the nation.

Not only are lighthouse beautiful and picturesque, but they bring back a sense of nostalgia, poignancy, and romance that few other historical markers do. They're rich in historical details and stories. They're wrought with danger and death. And they're just plain fun to explore. Climbing the winding staircase, reaching the top, and peering out the tower windows (or in some cases going out onto the gallery) is breathtaking. 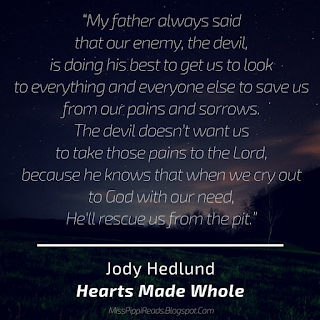 Thank you, Jody! It was great to hear about lighthouses as well as more insight about your story Hearts Made Whole. I'm looking forward to reading your next installment in Beacons of Hope: Undaunted Hope.