Roar! We celebrated Dinosaurs for a special Friday Fling. Throughout the year, the library hosts special storytime events on Friday. For alliteration's sake, we call them Friday Flings. Early in February, the theme was Dinosaur Day! The hour began with a storytime and followed up with a craft, dino book giveaway, and simple games set-up around the Children's Room. 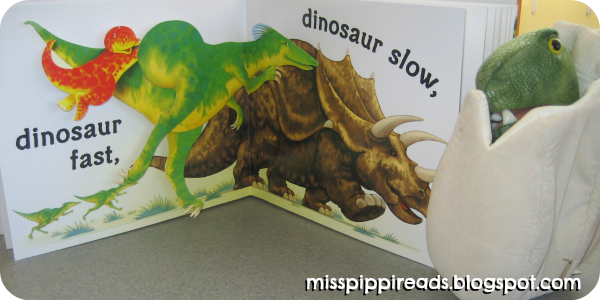 Oldland counts down from ten to zero. The ending zero is wonderfully clever and fun. The hardest part was enunciating the dinosaur names. A helpful pronunciation guide is in the back of the book, but, of course, I forgot so I got to stumble through the words and wing it. I even had some helpful hints from dinosaur lovers in the audience. Thank you!


We are the Dinosaurs SONG from Laurie Berkner: Whaddya Think of That?
Ten Terrible Dinosaurs by Paul & Henrietta Stickland

Dinosaur vs. the Library by Bob Shea

Shea's Dinosaur is fun and loud! It's important to control the roar if you invite audience participation. I gave the listeners a roar count while holding up the corresponding fingers on one hand. When I held me fist up, they knew it was zero and we were done roaring. It was a great way for everyone to roar and enjoy participating without going overboard and creating mayhem.

Craft: Dinosaurs on the Half Plate 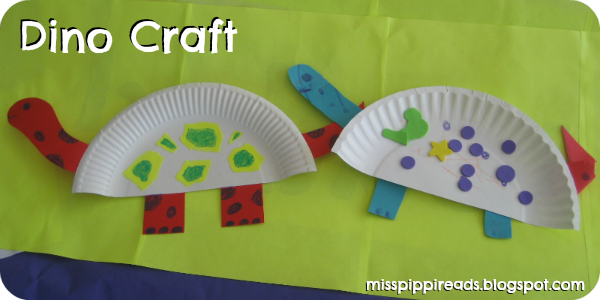 The plate dinosaurs came from an idea found on Pinterest via 1-2-3 Learn Curriculum. My co-worker, Amazing Miz L, created the template (red) and the young dinosaur lovers made their own (blue). The Seek 'n' Find printouts were from ... somewhere online. I misplaced the link, if I find it again, I will add it to this post.

The Dinosaur Alphabet Matching was created by Erin from Creating & Teaching.

Dinosaur Match-Up was created in Microsoft PowerPoint with clipart. The dinosaurs could be matched up by color or by dino name.
Posted by Miss Pippi at 10:30 AM